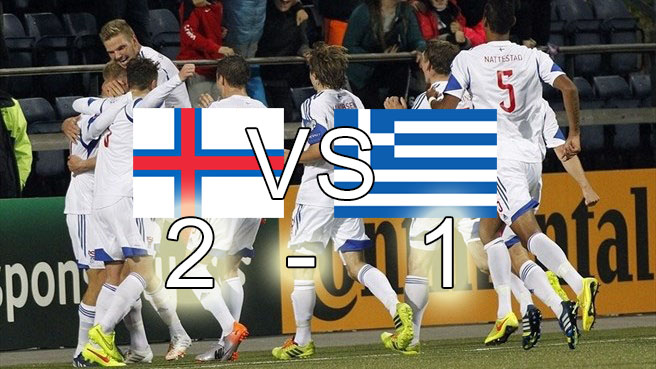 Faroe Islands defeats Greece again for the second time! The Faroe Islands (population 49.000) repeated their November victory in Greece (population 11.000.000) where they surprisingly defeated the 2004 European champions again. Hallur Hansson scored for the Faroe Islands in 32 minute and Brandur Olsen in the second half (69 minute), and in the last minutes of the match, Greece scored their only goal (Sokratis Papastathopoulos 84).

Sokratis Papastathopoulos scored Greece’s consolation goal heading the ball home after a corner kick by Ninis. But with this goal coming just six minutes from the end, it was too little, too late for Greece and its 50 brave fans who made the long trip to the small islands in North Atlantic Ocean.

This is the greatest Faroese victory since the legendary football match where the Faroe Islands beat the odds despite everything against them by winning over Austria 1-0.

See the highlights with all the goals below!